There is a quick way to generate different stoichiometric combinations of elements (or vacancies) inside a common structural framework (cell) is offered in the Advanced menu of the header bar of the Materials Designer.

Combinatorial sets are used to study a variety of modifications to a base structure through the substitution of elements at particular atomic positions. To this end it is possible to specify what elements are substituted for each atomic site in a structure and specify a different substitution rule for each position as well.

Why are combinatorial sets useful?¶

This feature lets users create multiple materials at once using an extended syntax for crystal basis as explained below. When a study involves a screening of a large number (eg. hundreds, thousands) of different compounds (or alloys) in order to identify the ones that possess a target property with a desired technological objectives. users might find combinatorial sets to be particularly resourceful and time-efficient.

Open the "Generate Combinatorial Set" dialog via the Advanced menu. The dialog has the following appearance: 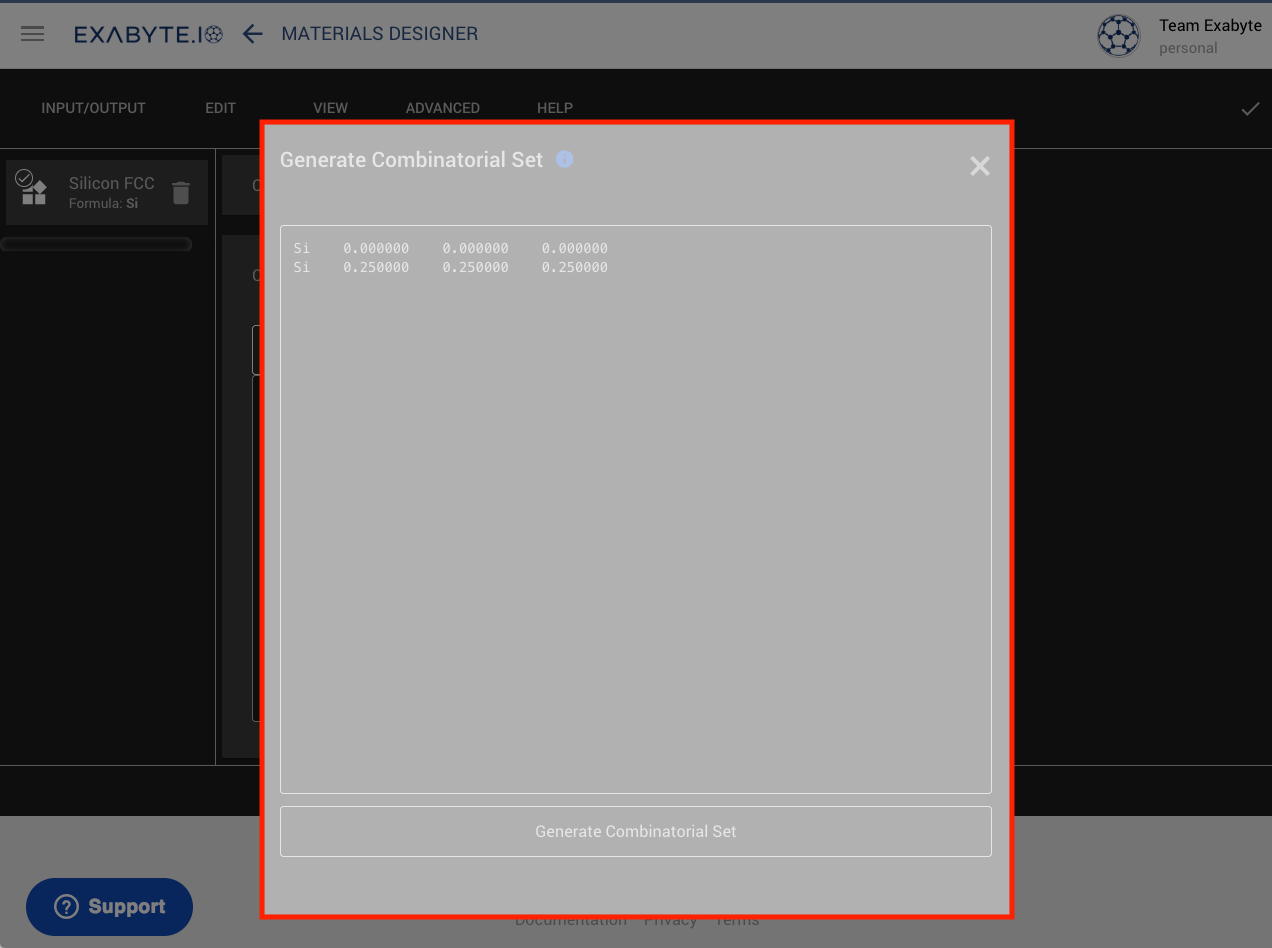 The dialog features a text field where the crystal basis of the desired combinatorial set can be edited, according to the format illustrated in the forthcoming examples. During the generation, the crystal lattice parameters will be taken for the currently selected structure.

Combinatorial Basis syntax is a superset of the basis representation format explained here). The characters denoting the chemical elements are separated by slashes or commas to generate "permutations" or "combinations", as illustrated in the following examples.

NOTE: permutations and combinations have to be used independently and NOT within the same basis context.

Permutations change all elements in basis simultaneously and are enabled when chemical elements are separated by slashes (/) with no trailing spaces, such as in the example lines below:

Hence, according to the above combinatorial set, the following 3 distinct structures will be generated:

Combinations change the elements one at a time and are enabled when commas are used as separators (,) with no trailing spaces. This is demonstrated in the example below:

This time, there will be a total of 6 structures created:

Vacancies can be added as part of the generated combinatorial set via the "VAC" keyword. This keyword can be inserted in the same way as an element name, and can be combined with either slashes to generate corresponding permutations, or commas for combinations (with no trailing spaces).

Once the text of the desired combinatorial set is entered, click on "Generate Combinatorial Set" at the bottom of the dialog of the same name, and the corresponding set of structures will appear in the list on the left-hand items sidebar of the Materials Designer interface.

An example of combinatorial set generation is in the animation below. Six different combinations are generated starting from a pure silicon sample, based on alternations between the elements Si, Ge and C following the second combination example above. At the end, each resulting crystal structure is reviewed to highlight the difference in atomic composition (crystal basis) and similarity in their underlying structural framework (crystal lattice).